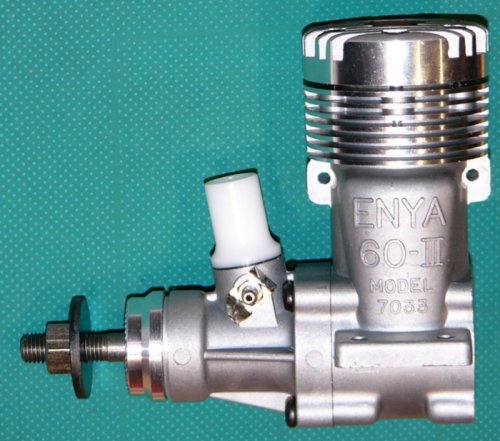 Early in 2007 Enya re-introduced a few of their old CL engines,among them being the 60-IIIB and the 45 model 6002. Many years ago I competed fairly successfully using the earlier 45 model 6001 and when they released the 6002 I bought one as a replacement. It was nowhere near as good as the earlier one for CL stunt as it had been re-timed for RC use. Personally I think Enya made a mistake with the 45 model 6002 so I opted for the 60-IIIB instead because I’d heard they were a very good stunt engine and I’d never even seen one before. Others also thought they’d made a mistake with the 45 and a few emails to Ken Enya convinced him to re-introduce the model 6001 in December 2007.

Enya engines are now available direct from the factory from their web page and a little hunting around will show some very interesting offerings including a range of matched pairs for twin engined models where one is reverse rotation. I bought mine through Kaz Minato in Japan who, at the time, was offering 20% off factory prices.

Enough of the background, on to my engine. Out of the box and it gleamed like a jewel reminding me of my old 45 (which I still have). The only difference between this and the old 60 is that there’s a new crankcase so the latest bolt through mufflers can be used instead of the old strap on type. This shows that the 60 (at least) hasn’t been built up using old spares but is entirely new. I ordered the silent muffler which has a machined baffle fitted between the front and rear parts. This muffler is also used on later Schneurle Enyas so, although it bolts straight on, the port size is smaller than on the engine itself. After the engine has been run in I’ll blend the port to suit to find out if there’s any gain by matching it. 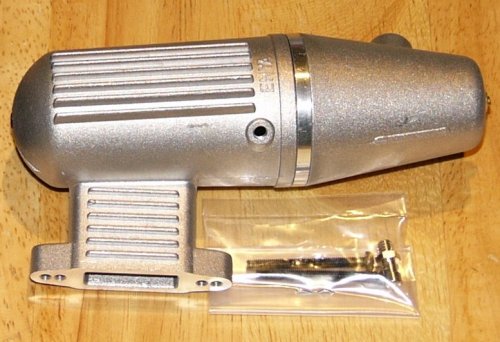 Now the fun begins by stripping the engine down. First the front housing is removed. Typically of many Enyas there’s no removeable backplate as it’s cast as part of the crankcase. However it can be seen in other photos that there are bosses for a removeable backplate if it was ever decided to use one. The later model 6002 40 and 45 also had this (the model 6001 didn’t) but it’s not peculiar to Enya because the so-called “heavy case” Merco 49 and 61 did it the other way round by having a removeable backplate and a one piece crankcase with unused mount bosses up front. As can be seen the crankshaft has quite a massive counterweight and the rear bearing does the alignment into the crankcase (and it’s a very close fit, I had to heat the crankcase slightly to get it out). I didn’t remove the crankshaft because the fit in the bearings is more than a hard push with my hands. This is a good thing because it lessens the possibility of the crank spinning inside the bearings. Props need to be drilled out to 7mm. 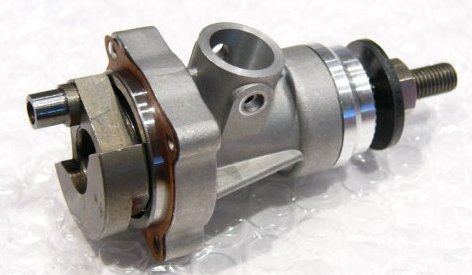 Here’s a glimpse inside the crankcase. The machining on the “backplate” is rougher than I’d have expected and surprisingly there’s no oil holes for the lower rod bush. 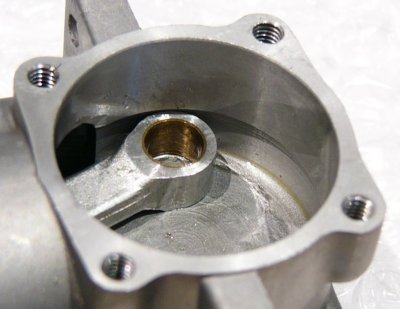 To complete the tear down the head was removed then the piston/liner was pushed out. This is one big advantage of the removeable front end in that there’s no jiggling around trying to get the rod off the crankshaft. A rarity nowadays (but all there was back then) is the use of a baffled piston. The slot in the head is to give clearance for the piston baffle but otherwise the combustion chamber is a typical hemispherical with a flat squish band and no shim/gasket is used. The two holes in the piston skirt matching with elongated holes in the liner give an extra flow path for the crankcase mixture into the transfer port with the added benefits of both getting lubrication to the upper rod bush and giving a cooling airflow to the underside of the piston crown. This is an excellent system and I’m surprised it’s not in more common useage. Enya have used it on their early 40, 45 and 60’s and OS used it on their early Max I, II and III’s with the cast iron pistons (these are ones that I know of but I’m sure there have been others).

One thing I noticed (before starting the strip) was that the piston had a slight catch as it travelled up the liner at the top of the exhaust port. With the piston/liner removed it was much easier to feel this catching so, not wanting to rely on any running in to smooth things out, I carefully filed the inside top edges of all the ports with a jeweller’s file until the ring moved freely over the ports. 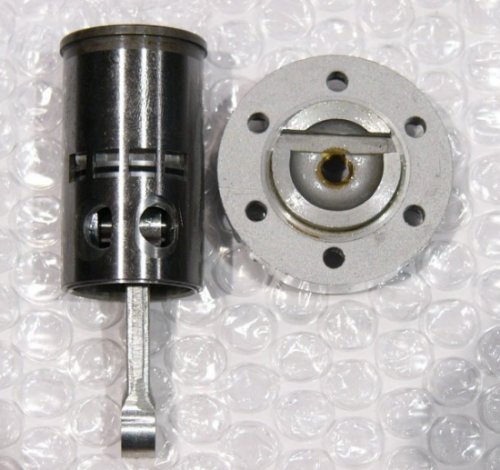 And finally here’s a close up of the piston showing the baffle on top, wrist pin held by circlips and the single ring which is unpinned so it can rotate while the engine is running. The multiple ports in the liner above are simply bridges to stop the ring expanding. 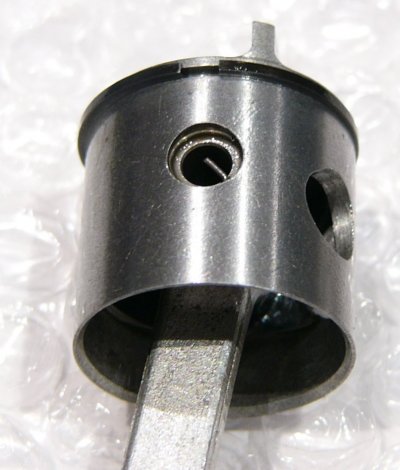 The engine was then reassembled and the following measurements recorded.

The only thing left to do was to begin running it in so on to the test stand. Being a ringed engine with steel liner it definitely needed my normal running in fuel which is 75/25 all castor plus very rich running. Prop used was a 12×5 Zinger wood. To cut a long story short (and to save myself too much embarrassment), after I figured out that I’d inadvertently got it totally flooded it then started with one flick every time. As a good stunt engine should. Initial running was extremely rich starting with around 5000 revs and a head temp of 60C (140F) and building up slowly over 6 tanks to 8500  (where it was just barely breaking into a 2 stroke occasionally) and a head temp of 115C (240F). All of this took 52 minutes at which point I took off the muffler for a look at the ring to see how things were going. It still looked brand new and only by taking a closeup photo (below) then enhancing the brightness and contrast coud I see any signs it was beginning to run in. Well they always say an Enya takes forever to run in and then longer to wear out. Looking closely at the photo though I was pleased to see that the ring was running in dead even from top to bottom so it’s sitting very flat against the liner. But even the instructions say it’ll take about 2 hours to run in.