Here’s something you don’t see every day and I’m quite certain not in any model magazines because they seem to only do reviews/tests on engines the advertisers would like to sell but why do reviews on engines everyone knows about?

A couple of years ago I picked up the engine on the left above but after a quick look inside I decided I’d never run it (there’s a huge void in the casting directly under the rear of the crankshaft bush) and that I’d never get another. However some time later a brand new rear exhaust CL version came up on Ebay which intrigued me (I have a soft spot for RE engines) and I got it for a very reasonable price. Other than being made in Russia I have no further information on these engines, not even when they were made but I suspect possibly in the ’80’s. Luckily the RE engine was much better made! It came with the CL venturi but no needle valve so I adapted an Enya needle valve to fit.

Both engines are very similar being Schneurle ported, plain bearing with cast iron (lapped) pistons. For now though I’ll concentrate on the RE version.

At first glance it seems there’s no easy way to attach a muffler or pipe to the exhaust (same goes for the SE too) but there’s a specially designed muffler/RE stub for both types. This photo shows the RE stub. The clamp is also cast with fins as on the stub. Interestingly, one side of the engine (above) has the size in cubic inches while the other side shows it as 7cc. 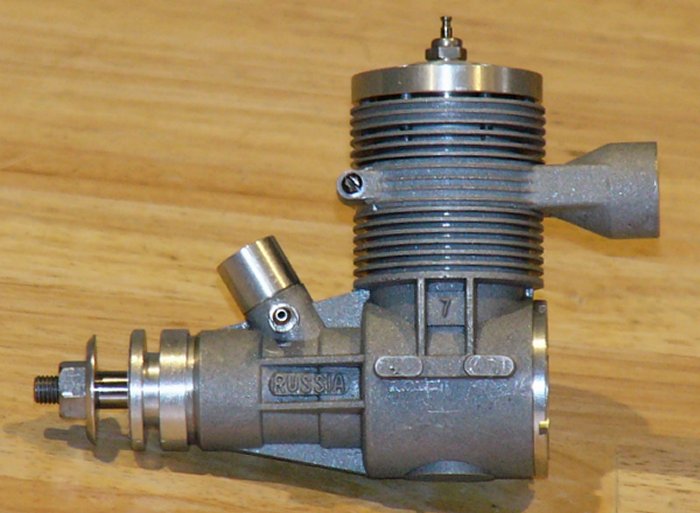 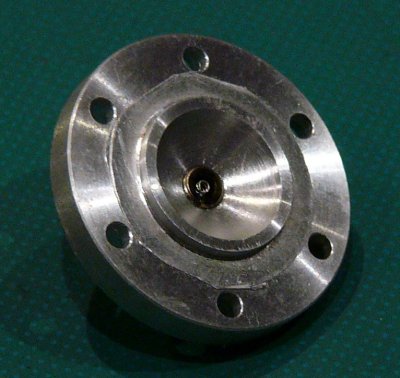 There’s nothing remarkable about the piston or liner other than the solid gudgeon pin seems to be a little on the small side. On RE engines one end at least of the gudgeon pin must be blanked off to prevent fresh mixture from the boost port escaping through the exhaust port. 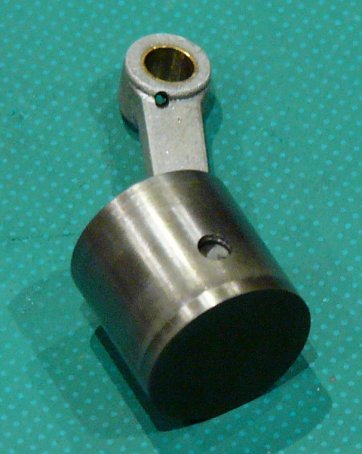 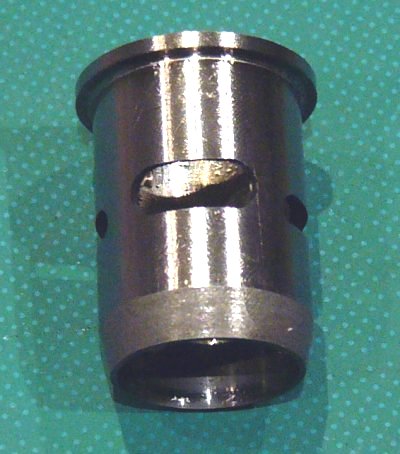 The crankshaft is quite sturdy with a large counterbalance for that cast iron piston and actually runs with little vibration. The inlet port is small but there are no stress raisers (sharp machined corners) so will be most unlikely to break in that area. The somewhat rounded opening and closing sides give a comparatively milder timing than the measured timing would indicate compared to the more normal rectangular port.

My biggest concern with running this engine was that it had a pinch that was tighter than anything else I’ve ever felt. Remember that this is NOT an ABC type engine! I measured the liner taper at .05mm from BDC to TDC. Liberally dosed with castor oil I had extreme difficulty getting it over TDC even with a fast flick. I decided not to try easing the fit with lapping but just run it and see what happened. To me it seemed to be a good test for the theory that running a new ABC rich and cool will overstress the rod causing a possible break, supposedly from the piston jamming into the pinch and the rod having to pull it back out.  THIS one was going to get into that huge pinch no matter how hot it got. Or didn’t get.

So onto the test stand, initially with the SE engine’s muffler which of course then pointed sideways. Fuel was 75/25 all castor and an 11×4 prop. As suspected, it was a bear to start because of that pinch but eventually I found a way to get the starter to spin it over enough to fire. Once running it was smooth as silk and extremely rich as needs be for lapped pistons, 6000 revs and a head temp of 63C (146F). At the end of the third tank I fitted the stub exhaust and attached a tuned pipe but set very long so it acted as just a muffler. Surprisingly this reduced head temp to 53C (128F) showing that the muffler was very restrictive. For about the first hour, every time the engine ran out of fuel (and going to near peak revs for a couple of seconds) the piston would lock into the pinch but it took around another 30 minutes before I was able to hand start it past the pinch.

Tuning is incredibly easy with about one turn of the needle needed to go from 6000 revs to 11,900 at which point it begins its transition into a 2 stroke until a steady 2 stroke begins at 12,000 revs. As for all that pinch and the rod, there’s been no detectable change in the rod bearing clearances and it most certainly has NOT broken the rod. With all my initial doubts about this engine I’m really starting to like it.